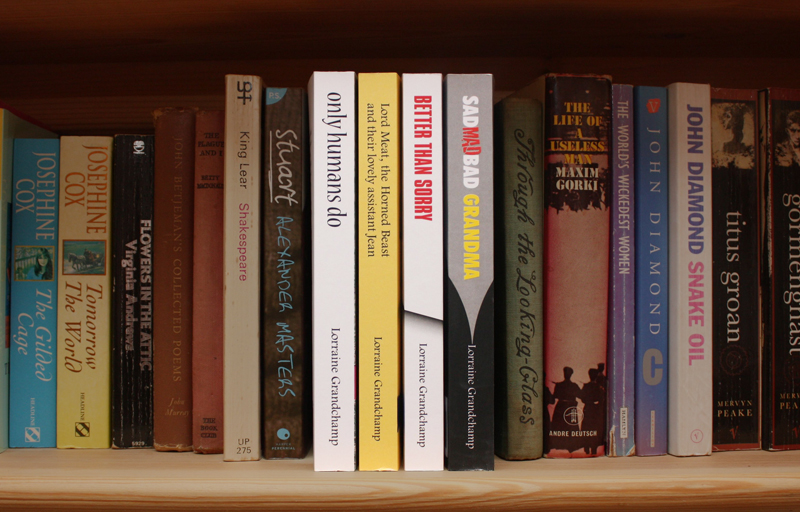 For years I had one very muddled book in my head which I could never seem to sort out. With age came a reorganisation of the brain cells and the realisation that I didn’t just have the one book stuffed in there, I had several. The first four have now been extracted from the grey matter and the fifth is in progress. (Click on a title below to find out more about the book on Amazon.)

Sad Mad Bad Grandma: Brenda Bannerman likes her life. Apart from her reduced circumstances, of course. And she’s come to terms with her compulsive eating, drinking and lying, if not the obsession that lies at the heart of it all. Howard Bannerman likes his life. And he loves his wife. But he knows nothing. Boy, is he in for a surprise.

Only Humans Do: Oncorhynchus mykiss. The rainbow trout. But if David Ashurst, newly separated and struggling to adapt to the single life, thinks fly fishing is the route to a woman’s heart and a sure-fired way to recruit a replacement lover-come-housekeeper, he’s definitely got his lines in a tangle.

Lord Meat, the Horned Beast and their lovely assistant Jean: After a thirty year relationship goes sour, sixty year old Alison Black returns to the landlocked island she once called home. Determined to finally figure out what she wants in life, her brother, friends and one small dog conspire to make her quest anything but straightforward.

Better Than Sorry: When eighty year old Donald Swain causes mayhem with his mobility scooter, Tanis Ellingham gets drawn into the aftermath by his apparent unconcern for the legal process that follows. Her haphazard quest leads to her finding out far more about him and his family than she could ever have bargained for.